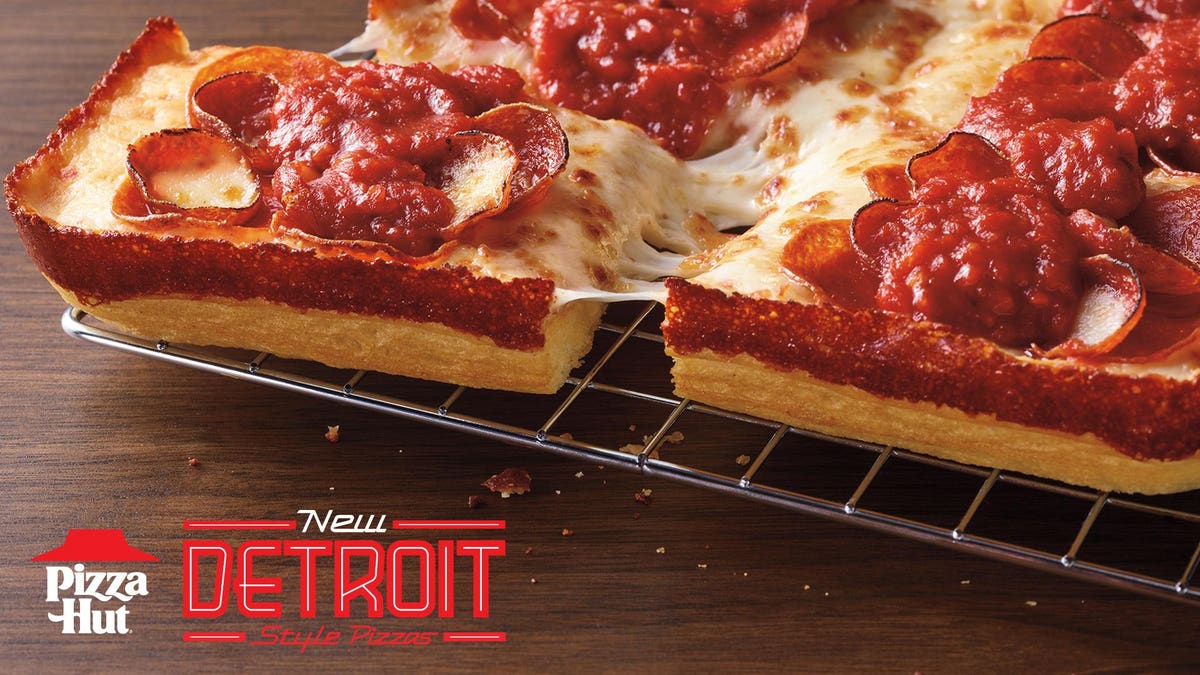 Pizza Hut doesn’t seem to be resting on its innovation laurels fresh off its Beyond Meat pizza launch in November. The chain today announced its new Detroit-style pizza, now available nationwide.

During a recent webcast to introduce the new product, Chief Brand Officer David Graves said Detroit-style is the fastest-growing trend in pizza. According to Datassential, the style grew by more than 66% on menus from 2015-2019, yet it is still quite elusive. In 2019, Detroit-style pizza was found on less than 1% of menus among pizzerias and Italian restaurants with 25 or fewer units. This demand/supply scenario should position Pizza Hut favorably as it brings the option to its 7,000-some units.

Democratizing an exclusive product is something the Pizza Hut brand has done many times before, according to CMO George Felix, citing its stuffed crust pizza (launched in 1995) and its Big New Yorker as examples.

“When we’re at our best, we’re at the absolute forefront of pizza innovation,” Felix said. “Now, with Detroit-style taking off, it’s our time to put our take on Detroit-style pizza.”

That said, Detroit-style is hard to duplicate–which is perhaps why the style traces its roots back to Detroit’s Buddy’s Rendezvous in 1946, yet hasn’t quite yet been, as Felix puts it, “democratized.”

Shawn Randazzo, who passed away in December, helped ignite its popularity after being named World Champion Pizza Maker of the Year at the 2012 International Pizza Expo. He purchased Cloverleaf, one of the first concepts to serve Detroit-style pizza, in 1997. About 10 years later, he started the Detroit Style Pizza Co., which is still in operation.

When I spoke to Randazzo in 2012, he outlined all of the details that set Detroit-style pizza apart. It’s characterized by its square shape, deep dish crust, edge-to-edge toppings and sauce on top. (Detroit-style is often called “red top” because the red sauce is ladled after baking). Finally, a blend of mozzarella cheese is spread to the edge of the pan, then caramelized. The dough is special, too–with just enough hydration that it can’t be spun. This creates a signature texture: crunch on the edges, softer in the middle.

After a year in development, and more than 500 iterations tested, Pizza Hut seems to have encapsulated this daunting process, with its rectangular crust, caramelized cheese spread to the edges of the pizza, proofed dough and sauce on top. Patty Shaheen, senior director of culinary innovation and strategy, said the company tried eight different sauces to get that last piece just right.

This particular sauce is only available on the brand’s Detroit-style pizzas, of which there are four recipes:

“We did not cut any corners on this. In the over 500 iterations of this pizzas we’ve tried over past year, we know pizza lovers will love this pizza,” Shaheen said.

Felix adds that Pizza Hut is striving to make its Detroit-style platform an entire experience, starting with the specially created boxes that illustrate the characteristics of this pizza.

“This is a pizza experience unlike any other. My kids are into these unboxing videos on YouTube, where people are going through elaborate reveals and unboxing things like shoes or toys. We realized this pizza experience is almost like that,” he said. “This box is unique to Detroit-style. It’s a nod to Detroit and all the things that make a Detroit-style pizza special and why it’s so good. We want to educate this awesome trend in pizza and Pizza Hut’s take on it.”

The Detroit-style pizza is initially available at Pizza Hut as a limited-time offer with a price point starting at $10.99. Each pizza comes with eight slices.

It’s worth noting that this introduction comes as Pizza Hut’s peers have found quite a rhythm with new product launches, despite the COVID-19 pandemic tripping up typical testing procedures. Their launches have proved to be wildly successful as consumers gravitate toward the delivery-friendly comfort of pizza during the crisis.

Domino’s, for example, grew its same-store sales by more than 17% in Q3, buoyed by the launch of new products like chicken wings, a cheeseburger pizza and a chicken taco pizza.

Papa John’s turned in a Q3 comp sales increase of nearly 24%, including 17% growth in revenues, driven by a “new culture of innovation,” as CEO Rob Lynch explained on its Q3 call. Recent product launches include the buffalo chicken Papadia and the double cheeseburger pizza, as well as the Shaq-a-Roni.

“We were able to accelerate the launch of new products in Q3. The highlight was the Shaq-a-Roni pizza. It was a differentiated high value product that didn’t create operational complexity for our stores,” he said.

Pizza Hut’s Detroit-style pizza is also a differentiated and high value product, but with 80 slices of two kinds of pepperonis and its own sauce ladled on top, there may be some operational complexity involved. Still, this platform takes an independent pizzeria favorite and brings it to the masses and that alone certainly creates a lot potential for the Pizza Hut brand. At the very least, it provides a significant product differentiator from its peers, which may be welcomed news for consumers who have spent the past 11 months binging on pizza.

A Day With Amy Allan | The Dead Files | Travel Channel
The best European destination to travel to in 2017 – Lonely Planet
Indian Street Food Chaat at Kashi Chaat Bhandar in Varanasi, India
What is the Basque Country? | Travel Documentary
Mount Rushmore – What NOT to Do at Mt. Rushmore
Real Estate in Fort Lauderdale, FL
Follow us on Facebook
Follow us on Twitter
Follow us on Instagram