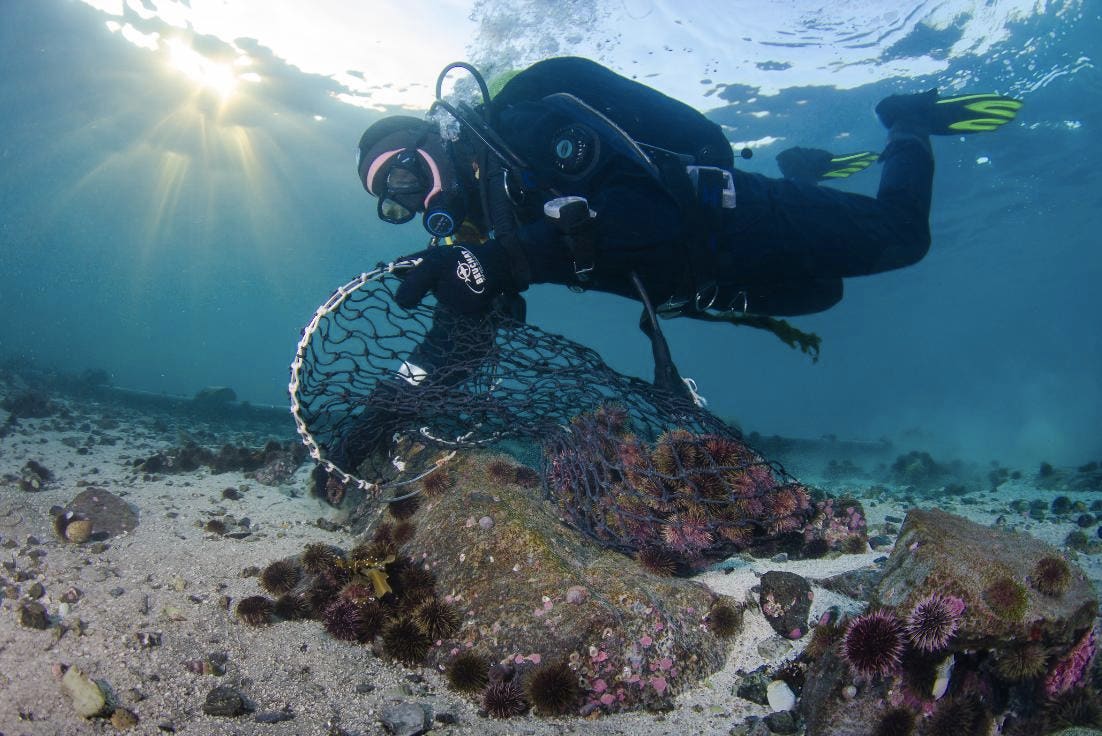 Scuba divers armed with mesh bags and thick neoprene gloves descend onto a rocky reef littered with spiny purple orbs. They carefully pluck each creature from the substrate, so as not to damage their brittle bodies. These urchins must be kept alive. The next stop for the urchins is a land-based aquaculture system located in Bodega Bay, California. Since 2013, Urchinomics, a restorative aquaculture company, has been testing and refining their process to collect and ranch these urchins to address the increasingly urgent environmental problem of urchin barrens in one of the locations hit hardest by this alarming ecosystem shift.

In just seven years, California’s kelp forests have been decimated by billions of hungry purple sea urchins (Strongylocentrotus purpuratus) that have gnawed the kelp down to nubs. Kelp is a rubbery algae that grows in shallow water. It forms dense forests stretching from the seafloor to the surface that rely on sunlight to grow. These forests sustain thousands of species and absorb carbon, which alleviates the effects of climate change-induced ocean acidification.

More than 90% of California’s kelp is now gone and urchins can persist for years in a starvation-state when food is scarce. Like zombies, the emaciated, empty shells continue to roam the reefs in search of drifting algae and kelp, destroying chances of regrowth.

The small percentage of remaining forests provide the best option for regrowth. As ‘spore banks’, these forests produce the next generation of kelp, but this process can’t happen with ravenous urchins gobbling up the fragile new seaweed that develops from these spores. Urchinomics hopes to protect the spore banks by thinning the urchins in the shallows. If enough kelp can be protected, the entire ecosystem may be able to rebalance. “We don’t believe that we will be the silver bullet,” says Urchinomics founder and CEO Brian Tsuyoshi Takeda, “we do believe that we can create just enough of that nudge to push a very important ecosystem from a barren state to a kelp state”.

Eat the urchins, save the kelp

Urchinomics will link up with non-profits and commercial divers to collect the zombie urchins, fatten them up in 6-12 weeks and sell the live urchins to distributing partners. Part of their business plan involves training these distributors how to prepare the animals.

Creating a market for purple urchins where one does not already exist requires innovative thinking. “We want to introduce urchins in a whole new way,” says Takeda. Urchins will be ‘shucked’ by removing the mouth parts and intestines, leaving only the bright orange roe (gonads) attached to the shell. “Serving urchins like that is unheard of even in Japan,” Takeda explains. That’s because urchin fishing in the wild is historically unpredictable. Whereas half of the urchins caught in the wild could be empty, ranching delivers a much higher percentage of full urchins. Takeda expects that 19 out of 20 of the urchins ranched in California will be full of roe and ready to sell.

The ten-acre Bodega Bay facility is located near the University of California, Davis Bodega Marine Laboratory (BML), surrounded by a vibrant local fishing community. The new site will use a form of aquaculture called a Recirculating Aquaculture System (RAS) where more than 90% of the water will be reused, and factors such as temperature and feed can be controlled for a more consistent product. The ranch will use a proprietary kelp-based feed that is a byproduct of kelp destined for human consumption.

Purple urchin ranching has never been done before, and it is not known how the creatures will behave in an aquaculture setting. Takeda’s eyes light up as he lays out the plan: “there’s a lot of factors that we haven’t really figured out yet…so we’ve budgeted a lot of time and resources in collaboration with the BML going forward.” Preliminary research in collaboration with the BML yielded promising results for commercial viability, but the research isn’t isolated to California.

The team is discovering crucial information at their sites in Canada, Japan and Norway; “it’s essentially a global network of R&D. Every region is answering a different question in this big puzzle that we call urchin ranching,” he says.

The biggest challenge for the company will be transporting the finicky urchins from the barrens to the ranch site alive. For an animal that is able to survive without food for years, urchins are surprisingly fussy when it comes to transport; “you look at them funny and they’ll die,” Takeda says with a chuckle. How many urchins survive the trip depends on factors such as wind, sunlight exposure and number of animals per container. If too many urchins are transported in the same container, they will essentially skewer each other with their spines.

One ranch with the capacity to produce 2,000 tons of urchins annually won’t make a dent in the billions of urchins on its own. Because of this, Takeda and his team want to make their impact grow exponentially by setting up multiple ranching sites in California through their new Urchinomics Impact initiative. “Our growth speed and the speed at which urchin barrens are developing don’t sync up…we have the core technology that can turn empty urchins into something of value,” says Takeda.

Through the initiative, all ranching research will be made open source and accessible to the public, which will allow non-profits, angel investors and donors to fund the creation of new ranching sites, the profits from which will go directly back into funding restoration efforts.

“We’ll play our part, but if others want to play their role…we’re not going to get in the way, and in fact we’ll set the table for them,” says Takeda, “of course we are profit minded, but there’s bigger goals than just maximizing profit…if philanthropists or investors want to help fund an urchin ranch as a non-profit venture, we will provide the tech, we will provide the know-how…everything.”

It’s easy to see the urchins as villains in the story, however the goal is not to clear the seas of them, but rather to bring populations down to sustainable levels in which the kelp forests can reach equilibrium once again. Appealing to the environmentally-minded population of California, Takeda hopes to flip the barrens back into forests through this venture. “The more you eat of these urchins the better your ecosystems become,” he says, “We’re trying to make sure that the restoration effort can live to fight another day… grant money, when it’s there is great, but we have to find some mechanism that allows restoration to happen without always going back to the begging bowl.”

20 amazing bucket list hotels for 2021
‘In Gratitude,’ Judy Jordan’s Geodesy Wine Supports Women In Agriculture
The poshest hotels that opened in Asia in 2020
Think Cheese Makes You Fat? Think Again And Order Artisan Cheese This Thanksgiving
Beachfront beauties and mountainside retreats: The best spa hotels in Sri Lanka
Real Estate in Fort Lauderdale, FL
Follow us on Facebook
Follow us on Twitter
Follow us on Instagram