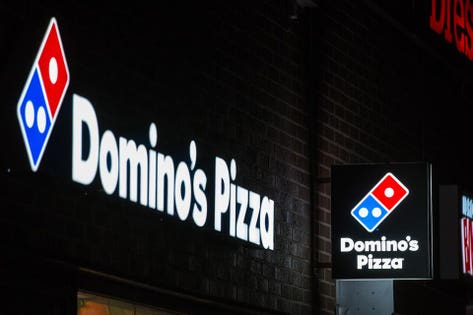 Domino’s Pizza’s momentum actually slowed a little bit toward the end of 2019, spawning a narrative about whether or not the rise in third-party delivery was a legitimate challenge for the company that has turned in 34 consecutive quarters of growth.

However, that narrative may have been a bit premature. On Tuesday we got a better idea of why Oppenheimer picked Domino’s to be one of its restaurant sector favorites for 2020.

During the annual ICR Conference in Orlando, CFO Jeff Lawrence made the case for the company and its unique fortressing strategy, in which more units are opening in the same trade areas versus establishing new territory.

“We are giving franchisees an investment opportunity that brings them closer to the delivery consumer and the carryout consumer,” Lawrence said. “It provides better service for our customers, our drivers are busier and our franchisees are able to grow their enterprise.”

Saturating a trade area to cut time off of a delivery or to provide easier access for a carryout order is a big risk right now as the entire restaurant industry navigates traffic erosion. Oversaturation is a likely culprit of those traffic declines.

But Domino’s has a unique business model that perhaps insulates it a bit from this factor. Specifically, it generates 55% of its business through delivery and 45% of its business through carryout. It’s kind of like the original ghost kitchen in that way, and we’re seeing the proliferation of ghost kitchens for the very same reason: to get closer to the customer, wherever that customer may be. That’s a big deal now as more consumers seek their meals off-premise.

In other words, Domino’s strategy certainly makes sense on paper. According to its unit economics, it’s also making plenty of sense in practice.

“We are laser focused on franchisee economics. We keep the store footprint between 1,200 and 1,800 square feet on average so that it’s operationally simple. The payback is better than three years,” Lawrence said. “That’s why we’re seeing capital flow back into Domino’s and why we’re continuing to grow.”

Fortressing should provide an additional boost of sorts.

“More than 90% of the carryout business at a new store is incremental. We’re not taking care of those customers today, and when we fortress, we have an ability to get that market share and we’ve done that,” Lawrence said, adding that the company has taken such share away from not only the bigger players, but the smaller chains and independents as well.

In 2014, Domino’s held about 24% of the pizza delivery market. Now, it’s about 35%.  It’s early in the game for the company’s fortressing strategy, but Lawrence believes the company can open an additional 2,000 stores in the U.S., from its current 6,000 or so.

Notably, Domino’s has taken a 1 to 1.5-point comp hit on this early-stage fortressing growth, a worthy sacrifice according to Lawrence.

“We understand the optics of that. What I’d remind people is we are making much more in total retail sales for that purposeful investment of fortressing. It’s one we’d make it every day. That’s really how you build your brand,” he said. “We’re closer to the customer. Fortressing is better service delivery time, it’s better for the carryout consumer, it’s better for the drivers. While other brands are out there expanding their territories, we are shrinking territories and we will take that 1-to-1.5-point comp impact all day long to win the long game in pizza.”

Lawrence also briefly touched on Domino’s technology initiatives, which have driven sales (about two-thirds of total sales are digital) and loyalty membership, at more than 23 million active users. He notes that this loyalty metric is a key to growing the brand, as it provides an abundance of data on where consumers are and what consumers want. There are 85 million unique customers in Domino’s database, so even more opportunity remains.

The company is also aggressively testing autonomous delivery through partnerships with both Ford and Nuro.

“We’re not done innovating. We’re investing in areas like … autonomous vehicles,” Lawrence said. “We’re really trying to stay ahead of the industry and where consumers are going and making sure when–and that’s when, not if–this comes to market, Domino’s is ready to be the first, most effective partner to implement those [technologies].”

Domino’s, like many big restaurant companies, is also investing in artificial intelligence. Earlier this week, Nvidia GPUs presented its Domino’s partnership at the National Retail Federation, which is aimed at accelerating the chain’s AI-powered applications. Domino’s is leveraging AI to market its loyalty program and to improve order accuracy, for example.

All of these efforts are why Lawrence is abundantly confident for 2020.

“We still have a goal of getting to 25,000 stores and $25 billion in sales by 2025,” he said. “Our job is to continue to drive real value and drive that elusive traffic, which is very hard in our industry. But we’re poised for a great year.”

The company is scheduled to report its Q4 earnings on Feb. 20.

Oyo CEO Ritesh Agarwal touts Indian hospitality start-up’s business model despite complaints
Here are the most wish-listed Airbnb properties of the past decade
How to road trip the Rocky Mountains on a budget
Ghost Adventures: Revisiting Alley Studios – Travel Channel
Top Offbeat Places to Go Kayaking in the World
Follow us on Facebook
Follow us on Twitter
Follow us on Instagram