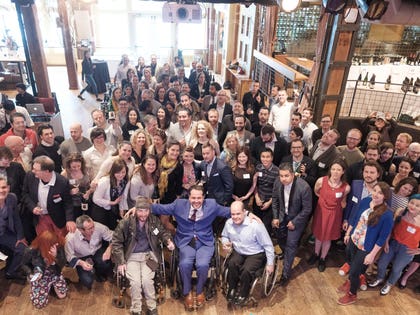 Alex Elegudin and Yannick Benjamin met when they sustained spinal cord injuries in the same month. Both young men with eyes on the future, they watched each other advance in their chosen field, Elegudin as a patent attorney and Benjamin as an advanced sommelier with the Court of Master Sommeliers.

In 2001 they together founded Wheeling Forward to help other people with disabilities live fully and “enable them to see possibility where others see insurmountable obstacles.” The organization has provided 339 wheelchairs for people in need, created a comprehensive fitness program for people with spinal cord injury, runs adaptive clinics on water-skiing, skydiving, snow skiing and scuba diving, and provides advocacy and support in many other ways.

Wheeling Forward is engaged in a suite of fundraising efforts, including its signature experience, Wine on Wheels, a tasting event that’s been hosted in New York City, Washington D.C. and Portland, Oregon and has raised over $900K in the last eight years. Benjamin’s network in the wine industry has made this event a success coast-to-coast, drawing attention from consumers as well as sommeliers, restaurant owners and wine enthusiasts.

“I myself was told that I could never work in a restaurant in a wheelchair because it was never done before, but my response to that is very simple,” says Benjamin. “Just because it hasn’t been done before, doesn’t mean you can’t be the first.” Benjamin wants the same for the individuals that Wheeling Forward supports, to be there for recently disabled people as they learn to live independently, pursue education and attain a higher quality of life.

In 2020, Wine on Wheels will come to Chicago for the first time to feature sommeliers from several local restaurants pouring nearly 100 wines. The event will also include a silent auction and proceeds from Wine on Wheels Chicago will be split between Wheeling Forward and a local organization, BACKBONES, which assists people with spinal cord injury or disease.

Benjamin says his motivation for bringing the event to Chicago was the opportunity to support and work with BACKBONES founder Reveca Torres, who was injured and paralyzed as a teenager. “Reveca started BACKBONES to ensure that others, especially those newly injured, had access to resources, information and the same type of peer support she had,” says Benjamin. “Reveca and I started to discuss doing Wine on Wheels in Chicago starting in 2014 so it has been a long time coming.”

He also credits Peter Kuhnz, Wine on Wheels co-founder and maître d’ at RPM Italian. “He’s been an absolute gem and the centerpiece of putting Wine on Wheels Chicago together.”

Both Kuhnz and Benjamin say Chicago was a top choice for this event thanks to a strong wine community. “I’ve witnessed hard-working somms changing the landscape of wine through their contributions to the wine industry,” says Kuhnz. “There’s this unique sense that everyone acts as family, rooting for each other and wanting one another to succeed.”

This event is designed to be inclusive, to promote inclusivity in an industry that many view as exclusive. “The compliment that I get the most is how incredibly diverse the event is and how positive the ambiance is,” says Benjamin. “The truth is, in the wine and hospitality industry, there still is a lot of work to be done when it comes to diversity and those of us who have the resources and experiences need to reach out across the aisle and get involved with cultivating new faces.”

Benjamin does this by leading, and offering mentorship when he can (in fact, he’s a mentor to Kuhnz). “I like to say that at Wine on Wheels we are ‘turning wine into hope’ because our objective is to give people opportunities that they would not have and to be sure to remove as many obstacles as possible so they succeed in achieving their objectives.”

Tickets are on sale now and guests of the event will experience wines from around the world with a focus on Mediterranean, European and domestic wines. “With over 100 different wines on offer, Wine on Wheels is a great opportunity to taste within the greater context of the world of wine,” offers Corey Drake, wine director at RPM Italian, which is part of the RPM family of restaurants, including the event venue, RPM on the Water, which was renovated in 2019 with accessibility in mind.

Jason Limjoco is an account manager at Heritage Wine Cellars Ltd, one of the event’s largest local supporters. Limjoco hints that some of Heritage’s most prestigious suppliers have donated wine to the event. “Vineyard Brands, which represents some of the top estates from around the world, will be pouring wines like Delamotte Blanc de Blancs NV Champagne, 2015 Liger Belair Bourgogne Rouge from Burgundy and 2017 Famille Perrin ‘Les Sinards’ Châteauneuf du Pape from Rhône,” says Limjoco.

There will also be the chance to experience some unique wines including bottles from Diamond Wine Importers, which Limjoco says “represents benchmark producers from various regions of Greece and they will be pouring the 2018 Domaine Skouras ‘Salto’ Moscofilero from the Peloponnese, Kir Yianni ‘Akakies’ Sparkling Rosé and 2016 Alpha Estate ‘Hedgehog Vineyard’ Xinomavro from Amyndeon.”

The event promises to be a positive experience, using wine as a focus to bring people together. Advice from Benjamin: “It is important to learn to enjoy every minute of your life. Focus on the things that you do have, and not on the things you don’t have. Never lose your curiosity, don’t wait for people to come to you, but reach out for help. But finally, when you wake up in the morning, be thankful! Be happy now. Don’t wait for something outside of yourself to make you happy in the future.”

ROADTRIPPING TO JACK
Why Now’s The Time To Master Spain’s Ultimate Dish, Paella
Travel-starved Taiwanese sign up for fake flights to nowhere
48 hours in . . . San Sebastián, an insider guide to the Spanish beach town turned Michelin hotspot
The best family-friendly hotels in Athens, including kids’ cooking classes and turndown treats
Follow us on Facebook
Follow us on Twitter
Follow us on Instagram